Block to the Future – Insights from our Envato WordPress Specialist

Hi Authors! I’m Aaron, I work with WordPress at Envato in Melbourne. I’ve been working with and developing on WordPress for over 10 years. I was a co-organiser of our local WordPress meetup group for over 5 years and I was one of the co-organisers of WordCamp Melbourne in 2013.

I joined Envato around twelve months ago to work on the Hosted team at HQ. It’s been a really exciting project to work on. I get to work with our team and authors from all around the world to improve our product for customers.

This year, I’ll also be attending WordCamp & EuroTour 2018 with fellow members of our Envato staff and author community – exciting!

Keeping Up With the Gutenberg Project

I’ve been keeping up with the Gutenberg project since it started in early 2017. I’ve been reading all of the various blog posts, social media conversations, slack discussions, GitHub issues and I’ve been testing out some of the different feature branches.

There’s currently no clear roadmap for the Gutenberg rollout which is causing quite a lot of frustration within the WordPress Development community. I’ve been trying to put the pieces together, so here’s how I think Gutenberg will be rolled out…

The core team have been discussing a ‘Try Gutenberg’ callout since July 2017, it almost made it into WordPress 4.9.5 a few weeks ago, it was scheduled for 4.9.6 but it’s just been pushed back to WordPress 4.9.7.

The current proposed WordPress 4.9.6 release date is the 15th of May, recently it’s typically a month or so between minor releases so WordPress 4.9.7 could be released mid-June. 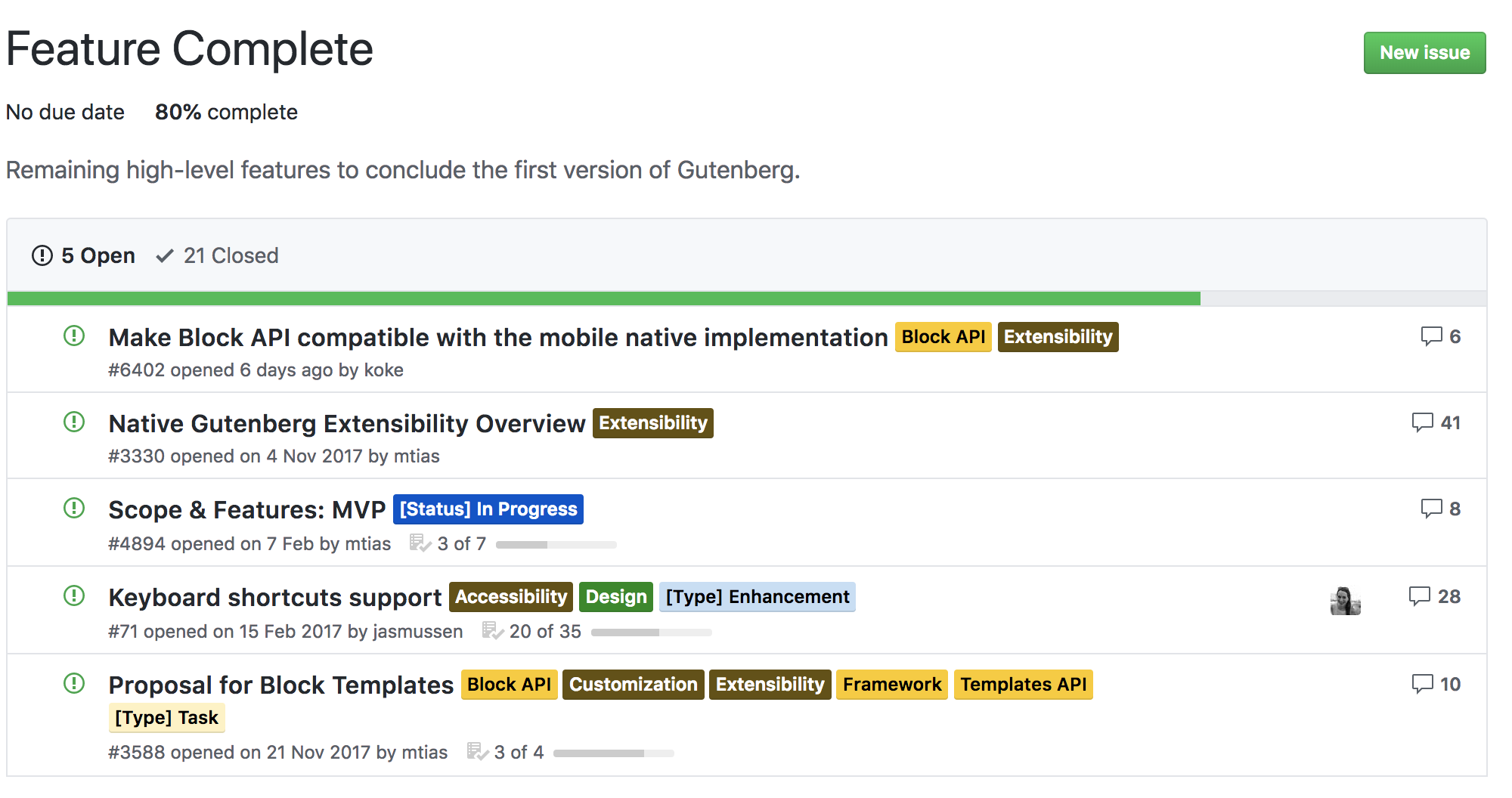 It’s fair to say that most WordPress sites auto update to minor versions, as the Try Gutenberg callout is planned to come with a minor version, it’ll be visible to many millions of WordPress users next time they log in to their dashboard.

It is likely this will drastically increase the active installations of the Gutenberg plugin. At this time authors may see an increase in support requests and a potential influx of compatibility issues reported to the WordPress core team.

For the new editor to be ready for a merge proposal for WordPress core, we expect all of the open issues on the Merge Proposal: Editor milestone to be addressed. As this is the biggest change to WordPress in the last 15 years, there are at least 12 other areas of WordPress that will be affected, and the team have created more milestones to track these.

Likewise, we expect to have an update about Gutenberg and some clarification around dates from the project lead – Matt Mullenweg at WordCamp Europe on the 15th of June. 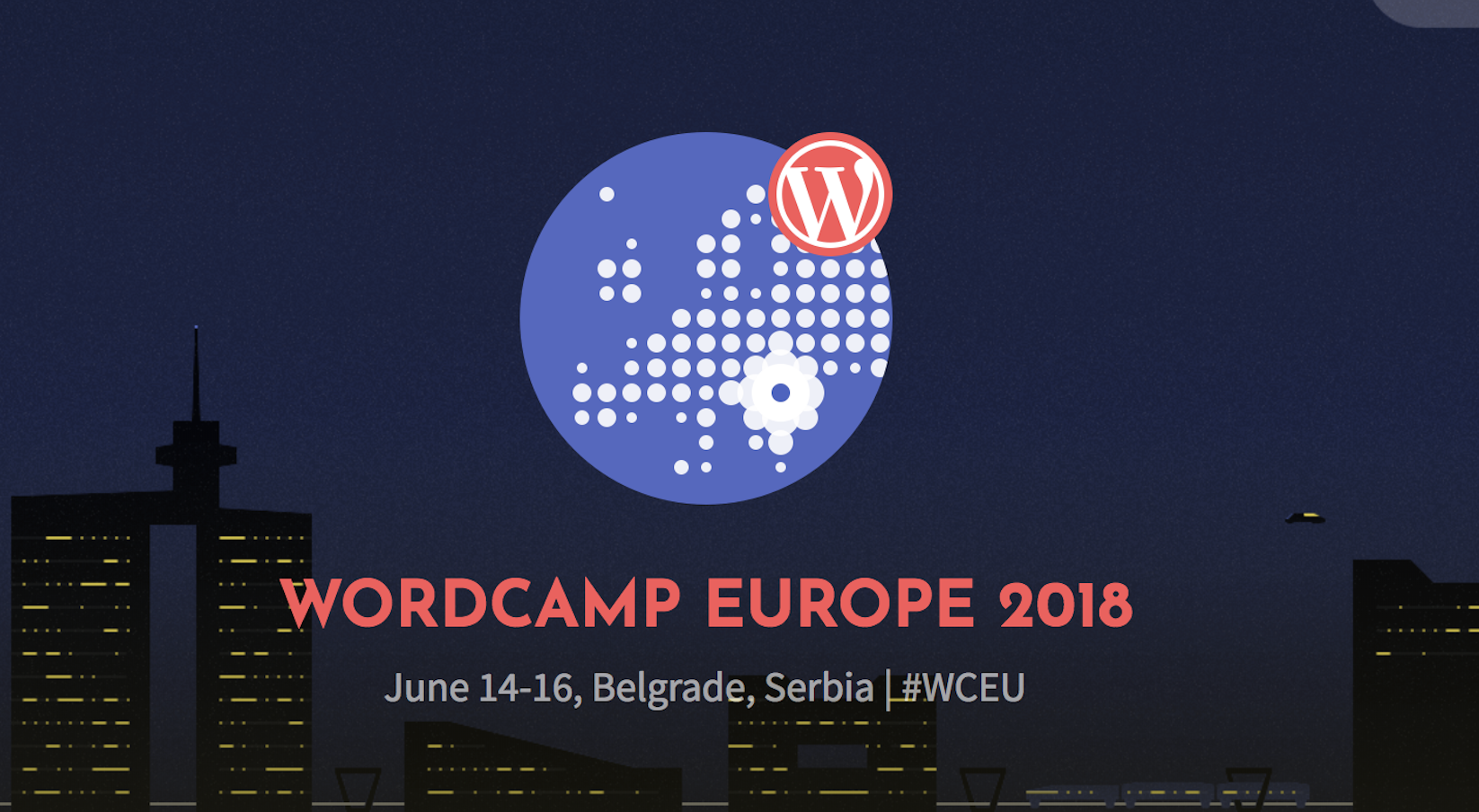 During the merge proposal window, there will no doubt be a lengthy debate regarding its inclusion; the team will go through the typical development cycle, which includes beta releases and release candidates.

We can assume this process will take a little longer than the usual 1 or 2 months between merge proposals and release. It’s safe to assume the development cycle will take at least 2 months for the new editor to be merged into core.

Therefore, we’re thinking, the earliest WordPress 5.0 would be released is in August 2018. It’s highly likely it’ll be later but it’s best you continue to test your themes and plugins with Gutenberg during this time as the plugin will see increased adoption due to the callout!

What’s Next – What Does the Future of WordPress Looks Like?

After WordPress 5.0 and the new editor has been released, developers will continue to create all kinds of innovative blocks. We also expect to see developers of the most popular WordPress plugins embracing and building features for the new editor (not just compatibility).

After WordPress 5.0, the core team will shift the focus onto customization as mentioned on the Gutenberg plugin page

We think Gutenberg and WordPress 5.0 bring opportunities for Envato Authors. We hope authors are currently testing their items to ensure they are compatible with Gutenberg. We’re expecting our best authors to be thinking about optimizing their items and to capitalize on the functionality that the new editor provides.

Check out this article on preparing for Gutenberg from our Power Elite Author, ThemeFusion and consider some of the key opportunities below:

These could be new Gutenberg add-ons that enhance the core feature set, add blocks to the library and provide custom templates. For example: ‘Real Estate’ themes can feature a custom block to list featured properties. ‘Fitness’ themes can offer a class timetable block or a ‘Job’ theme can provide a job listing block.  These could be bundled with your theme and/or sold separately on CodeCanyon.

2) Improve Your Items to Take Advantage of Gutenberg

This would include converting your shortcodes to blocks where possible, updating your themes so all of the styles for the core Gutenberg blocks are supported.

These could be new additions to the block library (i.e. as “premium” block add-ons), extensions for existing features or even custom Gutenberg templates in the future.

Looking into the Future

We’ll keep you updated as new information and release dates come to hand. In the meantime, we recommend that authors add the Gutenberg Attribute to your items as soon as they are compatible. 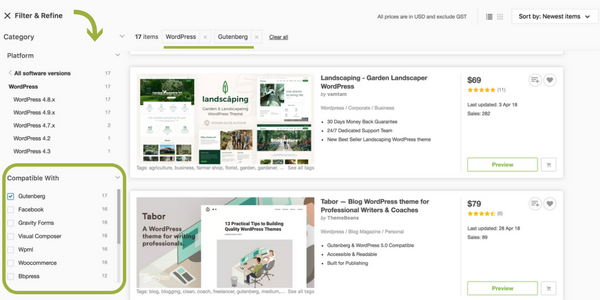 Don’t forget! You can also continue the conversation, ask questions and share your Gutenberg insights by jumping over to our dedicated Gutenberg thread on the forums to connect with your fellow author community.

Your Number One Author Resource Has Landed